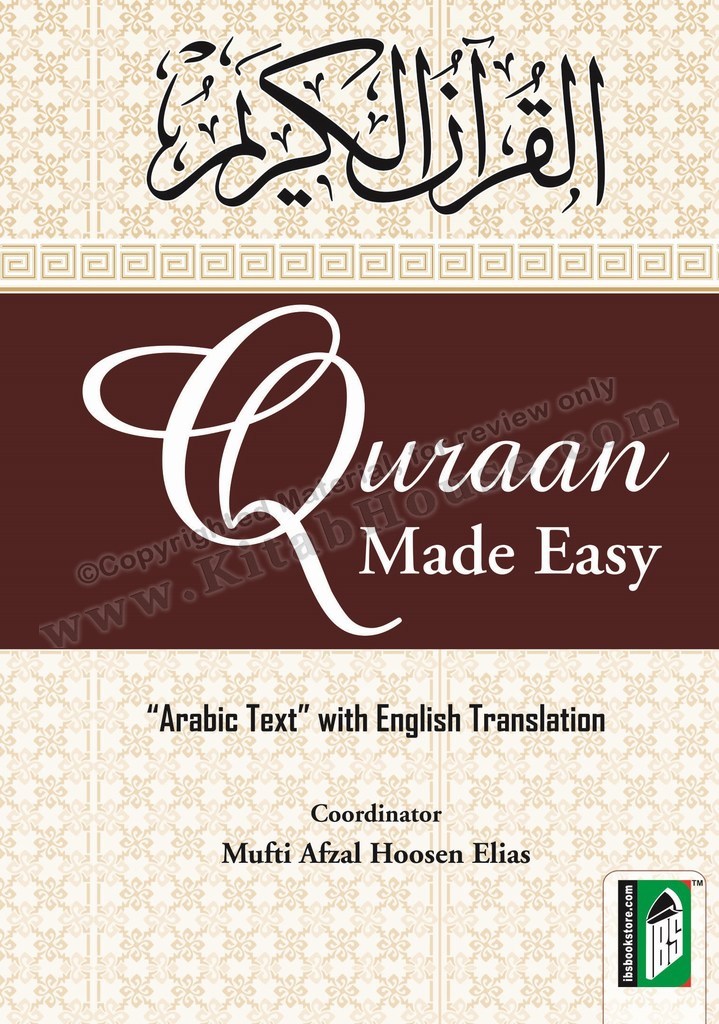 This is the complete english version which includes all 30 sections of the Quran as well as the inline commentary and introduction to the Quran.

Commonly known Arabic words such as Rabb, Kuffar and names are not translated as these are second nature to most Muslims, however there is a glossary in the beginning, for those new to Islam.

A very informative read and makes understanding the Qur'an much easier, In'sha-Allah.


Translator's Foreword:
In preparing this translation of The Quraan, the dilemma was whether to use very ornate and elegant language which could compromise clear understanding for most people or to use a simple and clear style of language. Because the intention was to make The Quraan clear to every person, the second style was chosen, even though it may at times lack the dignity and lofty tone. It was also chosen because thousands of English-speaking people who are not very proficient in the language found the lofty language of other translations difficult to understand. This translation caters for their needs by providing where necessary synonyms between brackets. It is the language of only the Divine that can combine exceptional eloquence and ease of understanding.

Unlike in previous translations, footnotes are not used in this translation. Rather the explanations which have been given between brackets, serve multiple purposes.

"Excellent translation, the commentary makes it easy to understand without having to search for references and footnotes. In some ways it is a mini-tafseer for someone who does not have the time to read a full tafseer".

"I have many books with english translation of the Quran and commentary, but the content of the commentary is too extensive. I have been waiting for one to be a lot more precise and straight to the point and here it is! Alhamdulillah, I definitely would recommend. Before, the translation, there's a whole section introducing the Quran itself and explaining the types of revelations and overall teachings of the Quran - making it perfect for someone who has little knowledge about the Quran and Islam. So as a whole, in my opinion its audience encompasses ALL people, which is a bonus!" - Halima

"This translation is wonderful! It doesn't leave anything out and is a comprehensive Quran but allows English speakers to fully understand it in simple language and explanation. The author has put a lot of work into translating it and putting commentary so everyone can read the book. This is an excellently translated book and I would give it 5 out of 5." - Emilio Radford

"This is by far the best translation of the Quran. It is translated so it can be understood easily in English by anyone studying the Quran, or reading it. The translation was done extremely well and is very easy to understand. The notes are also very helpful and while they don't intrude upon your reading experience they let you know what some words, places, and things mean. It doesn't leave anything out and is a great studying book for English students learning about it or anyone else who would like it in an easy to read, and understand format." - Ian Barti

"I cant tell you how pleased I am. There is a straight to the point explanation for every verse. I am an English speaker. I only know a little Arabic. I usually memorize verses in Arabic and go to the English translation. Since Arabic is such a different and ancient and beautiful language, there is always something lost in translation. This Quran translation does a wonderful job for English speakers. May Allah greatly reward everyone behind this book. And I hope we all use it for the benefit of the hereafter."

"Best translation available in English, focusing on modern spoken language. The word choice is excellent and eloquent while not disengaging the reader from the content." - Samir Ali