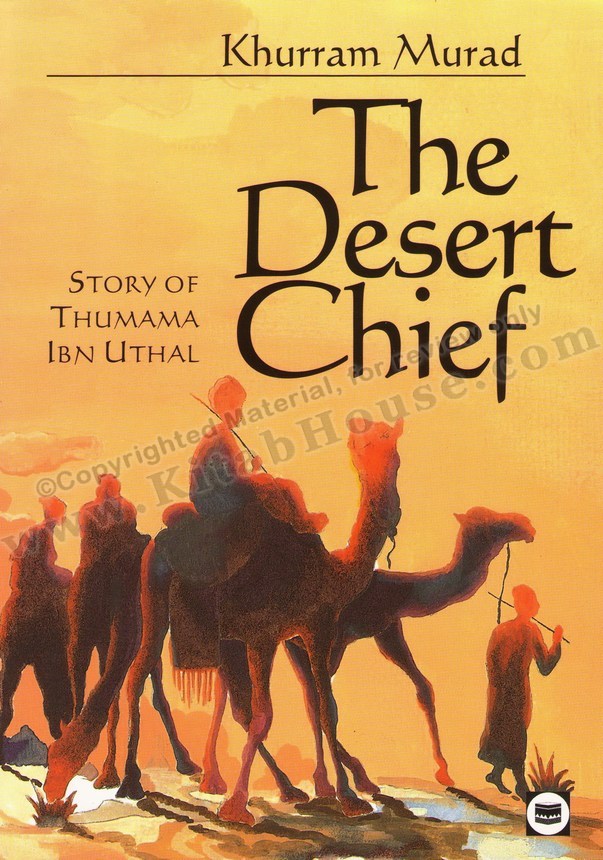 THE DESERT CHIEE: Story of Thumama Ibn Uthal (ثَمامه اِبنِ أثال رضی الله عنه), a powerful tribal chief in Arabia, to whom the Blessed Prophet had sent a letter inviting him to Islam.

This so enraged Thumama that he set out to kill the Blessed Prophet. However the Muslims captured Thumama on one of their nightly patrols and the story, meant for 8–14 year olds, tells how through the humane and digniﬁed treatment accorded to Thumama by the Blessed Prophet and his Companions, this powerful and proud chieftain became a Muslim.
Includes full color illustrations.

THE MUSLIM CHILDREN’S LIBRARY aims to provide young readers with something rarely found in current children’s literature; meaning in life, paths to an integrated development of personality, vistas into a world extending beyond this life. A Muslim child especially, can develop a fresh faith, a dynamic commitment, a strong identity, and a throbbing yearning and urge to struggle — all rooted in Islam.

At the same time the books are designed to be a joy to read, to hold a child’s attention and curiosity, and to increase his knowledge. Both texts and general supplementary readings are included. Each title (more than 40 titles have so far been published) is prepared for a particular group but, we hope, may find favor with all.

Other Books in The Series Are:

THE ISLAMIC FOUNDATION is an educational and research organization devoted to making Islam a living reality in our age. For this purpose, it aims to improve human communication and develop a better understanding of Islam among all people of the world, Muslim and non-Muslim, so as to galvanize man to the message and ideal of One God and the unity of mankind, as brought by all the Prophets of God throughout the ages, last of whom was the Prophet Muhammad (blessings of Allah and peace be on him). The Foundation has research units in Islamic Economics, Christian-Muslim Relations, Muslim Central Asia and Literature tor Children.

To further its role in the field of higher academic studies, the foundation has recently established the Markfield Institute of Higher Education offering post-graduate courses in Islamic studies leading to MA, MPhil and PhD.
RELATED PRODUCTS