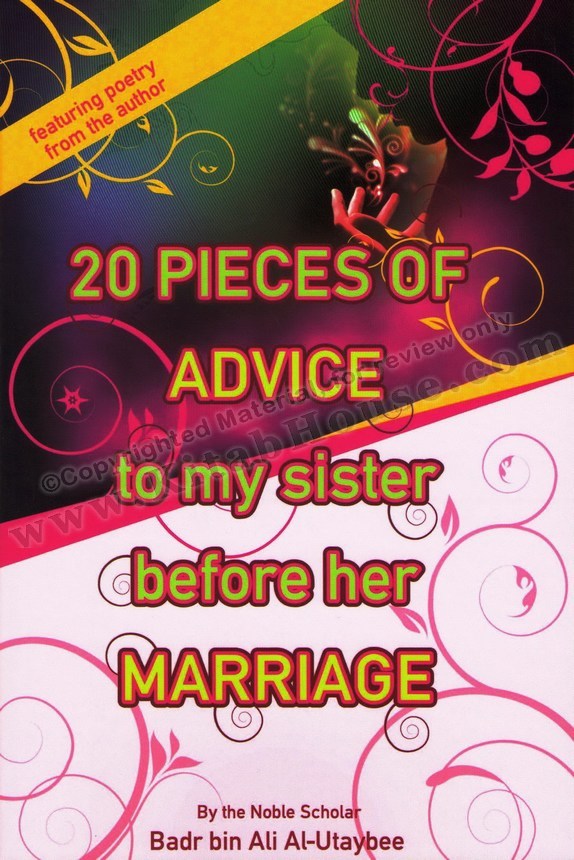 20 Pieces of Advice to My Sister Before Her Marriage

“A righteous woman is obedient to her husband and is dutiful to Allah. She is purified and immaculate…”

“...Her words are like sweet ginger, her embrace is good (morning, noon and night). She assists him in doing righteous actions and protects him from all avenues of evil. When he looks at her he is happy; when he sits with her, his heart is delighted…”

“There is nothing strange about a woman’s love for her husband and her affection toward him. But truly loving one’s husband entails having love for those whom he loves especially his parents, siblings and friends.”

“It is the habit of women who are deficient in their intellect, to despise their husband’s friends under the pretext that they busy the husband away from his wife, steal their time, and other petty arguments. This is not befitting even if your husband lagers on with his friends to the extent of taking up your time.”

Ash-Sheikh Badr Ali Al-Utaybee is from Taif, Saudi Arabia and is a student of the former Mufti of Saudi Arabia, Abdul Aziz bin Abdullah bin Baz, as well as other scholars such as Al-Allaamah Muhammad bin Salih al-U’thaymeen, Ash-Sheikh Salih Al-Fawzan, Ash-Sheikh Abdullah Al-Ghudayaan and others. He is currently a member of the Ministry for Da’wah & Islamic Affairs in Ta’if, Saudi Arabia as well as the Scholarly Committee for the Service of the Prophetic Sunnah.
RELATED PRODUCTS